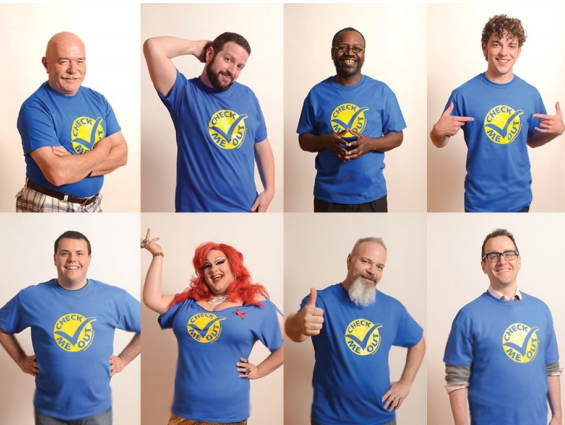 The ambassadors of the Check Me Out campaign. Willem Blois is pictured in the top row, on the far right. (Photo: AIDS Coalition of Nova Scotia)

Blois, a third-year music major, is pictured on the campaign’s advertisements, which have run on the Dalhousie Gazette’s website, and on its posters hung up around campus. They show him wearing a campaign T-shirt, standing to the right of a quote that reads, “I get checked out…will you?”

“Attaching yourself to the AIDS Coalition of Nova Scotia, there is still a stigma attached to HIV and any sort of STIs,” he says. But, “I couldn’t give myself a solid reason for why I couldn’t do it.… I would be angry later on if I didn’t do it.”

Blois, who came out as being gay at 18, is the youngest of eight men acting as ambassadors for the campaign, Check Me Out.

The 23-year-old pianist says he’s been “pretty lucky,” having had “good doctors” with whom he can discuss his sexual health. But Blois, whose mother is a nurse practitioner in Parrsboro, N.S., knows this isn’t the case for everyone.

Having learned about her experiences, Blois knows how challenging it is, particularly in rural areas, to encourage patients to get tested.

“It’s hard putting yourself past that barrier where, ‘Okay, I think this might be happening and now I need to make a phone call.’”

Blois has a copy of the campaign checklist, which he thinks is “fantastic.” He has also given one to his mother, who is now using it at her clinic in Parrsboro.

Check Me Out, which was launched in July at Halifax Pride, is urging gay, bi and bi-curious men — the target audience identified on the coalition’s website — to ask for regular STI, and specifically HIV, tests. But developing a strategy to get these men thinking about their sexual health and, ultimately, in to their doctors’ offices, was challenging.

“Getting people to change behaviours is always difficult, whatever the issue is, whether it’s going to the gym more often, eating right, [quitting] smoking – you name it.”

So the coalition took an alternative approach to what Aucoin calls “sexual health maintenance.”

In addition to the difficulty of getting male patients to see their doctors, which Aucoin says is “well-understood conventional wisdom,” gay men often haven’t come out to their doctors or don’t discuss their sexual health with them.

Aucoin refers to the findings of the Sex Now! Atlantic 2007 survey, which suggest that about 40 per cent of gay men never talk to their doctor about sexual health.

Knowing this, the ACNS set out to open the lines of communication between patients and their doctors by compiling a “cheat sheet,” says Aucoin, or “one comprehensive list that addresses sexual health across the board for this particular population.”

Now there are two lists – one for patients and the other for doctors. 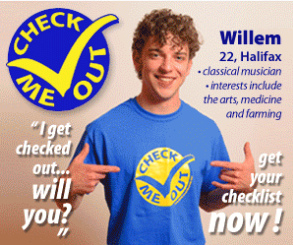 For gay men in Canada, like those in other developed countries, says Aucoin, rates of infection are steady, if not on the rise.

The Public Health Agency of Canada’s 2011 HIV and AIDS in Canada report concluded that almost 50 per cent of positive HIV test reports were attributed to men having sex with other men.

The ads in which Blois appears feature two bullet points, indicating that he’s a “classical musician” and that his “interests include the arts, medicine and farming.”

The campaign, says Aucoin, is “a double entendre, quite deliberately,” explaining that the ads are similar to personal ads.

Blois agrees, referring to “the culture of online dating – especially in the gay community.”

“Everyone has the Grindr on their phone,” he says. “So it’s very topical; a lot of people can relate to it.”

Users of the Grindr, and other hook-up and dating apps, typically have a profile, with a photo and “a tidbit of information about yourself.”

“I think they’re trying to tap into that,” says Blois.