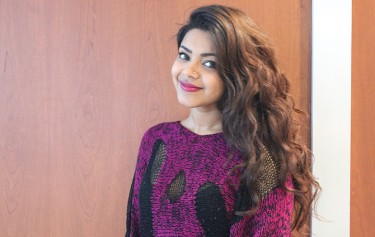 Kuwaiti native Dana Al Radhan has won a contest for her short film, which outlines her love for Canada.

The third-year student’s video was chosen from more than 50 submissions to the Canadian Bureau for International Education’s (CBIE) photo and video contest. For the competition, students were asked to comment on an international learning experience in Canada or abroad.

In three minutes, Al Radhan spoke about how Canadian culture positively influenced her life and the cultural differences between Kuwait and Canada.

She didn’t enter the contest with winning in mind, but a chance to practise her filmmaking skills.

“It was more than the prize – it was just putting the film together for me,” she said.

When in Kuwait, Al Radhan is used to dousing herself in perfume.

So when she first came to Canada it was a shock to discover the culture didn’t embrace scents, but blatantly bans them with ‘scent free environment’ signs plastered everywhere.

To show how she learned about this new cultural rule “the hard way,” Al Radhan made video that consists of a skit of someone choking in an elevator because of her pungent perfume.

Holding the door open for someone is something not a lot of people think about – unless you’re Canadian. Al Radhan noticed the gesture of politeness and started participating in the door-holding game.

“Now, I sometimes hold the door when the person is far away,” she said.

Being polite towards others later flourished into her concern for the well being of animals.

Gorging on meat is a classic cultural pastime in Kuwait. But after she watched a video on the meat production process in her nature and conservation course a year ago – she became a vegetarian and never looked back.

“We are a culture that loves meat,” she said. “So for me, to tell my parents I’m becoming a vegetarian was weird. They were in denial.”

Coming to Canada at 16 years old, Al Radhan says Halifax is where she has grown up and discovered who she is as a person.

“There are cultural restrictions [in Kuwait] in the sense that we don’t ask questions about things out of being polite. It’s not ‘don’t say that’ or ‘you’re not allowed’ but it’s more of a taboo. Whereas in Canada you can stand on the street and scream a question.”

Al Radhan worries her video has been misunderstood as “bashing on” her home country.

“There are a lot of things I don’t like about my culture and I speak out about them for one reason – because I love my country. By no means do I mean to offend or compare [cultures]. I’m just trying to make people think.”

After her undergrad, Al Radhan hopes to study dentistry at Dalhousie University. Later, she plans to move back to Kuwait to start her own practice and get involved in education and politics.

“Education and information is not something you restrict, ever,” she says.  “There should always be a flow of information about everything.”

She plans to advocate for an educational environment that involves more critical thinking, less by-the-book teaching and loosen the reigns on censored information.

Al Radhan wants to help change the gender dynamic of men having more authority and privileges than women.

“When I came to Canada I lived in my own little box where everything was nice and safe,” she said.  “I never wanted to question anything I believed in or what my parents told me. As a girl I believed there were certain things I couldn’t do – like horseback riding.”

Al Radhan continues to practise filmmaking and is currently working on a documentary about conflict in the Gaza strip called The Echoes Of the Deserted.