Matt Worona demonstrates how to use the new bike repair stand in front of the Student Union Building. (Photo: Helen Pike)

The green chrome tower, with wrenches, Allen keys and a pump have basic tools cyclists need to get back on their feet, or their wheels, as it were — free of charge and with instructions available on your smartphone.

“It’s great. I think it’s a good way to normalize cycling in the community,” says Alexander Tamo, a student and avid cyclist at Dalhousie. “It makes it more accessible for more people,” he says. Tamo has a pretty low maintenance bike and hasn’t had to repair his yet, but hopes people get a lot of use out of the units.

Students walking by don’t seem to notice the new stand at the Student Union Building. It is almost camouflaged, tucked away beside a similarly coloured Metro newspaper box away from the road and hugging the side of the building. Angela Hersey, a Dalhousie grad student would have walked by if it wasn’t pointed out to her. 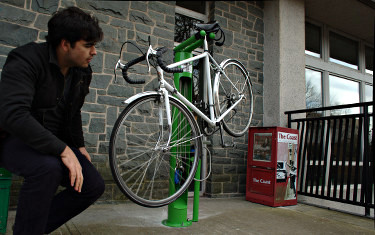 “It might be useful,” she says. Hersey looks at the tools available and thinks aloud, listing the things that can go wrong on an everyday bike trip. “If I got a flat tire, there’s lever here which is great, but I wouldn’t have a tube,” she says.

Hersey lives with a bike mechanic, so she has a lot of tools on hand, but says that some aren’t so lucky.

“I guess if you don’t have these tools somewhere else then it’s nice to know that this is available to you. That’s really, really great,” she says.

Matt Worona was the Campus Bike Centre co-ordinator who spearheaded an initiative to erect the $1,500 stands. The bike centre is joint initiative of Clean Nova Scotia, Dalhousie’s Athletics Department and the university’s Office of Sustainability.

First, the Dalhousie Student Union got funding for two units from the municipal District 7 budget. Around the same time Worona talked with the engineering dean who was interested in the idea and paid for two more units. The Halifax Regional Municipality was also interested in the stands, and approached him to work on funding four more units for the ferry terminals and main stops in the city core.

Within the year a total of eight units will be scattered across the south end. Worona adds that the North End Business Association has spoken to him about getting a stand on Agricola and Charles Street.

A station at Agricola and Charles would be only four blocks from a new bike lane the municipality installed on Windsor Street in October.

“We basically want to be able to have something in the north end,” he says. “Kind of feeding along routes that people take to work.”

In the meantime, Worona is working on some weather durable stickers to put up with the new stands on campus to help people find more bike help at the Campus Bike Centre if they need it.