University does need to collaborate to lower costs, says More

Education Minister Marilyn More is rejecting allegations from NSCAD supporters that she is pushing the university toward a merger to reduce NSCAD’s debt. 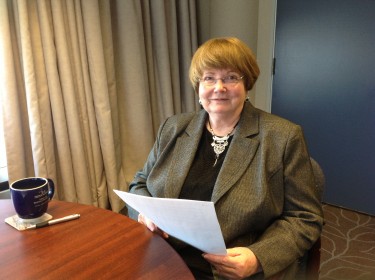 “At no time have we suggested that they should lose their autonomy, their brand as NSCAD,” she said. “But there may be co-operation. There may be things they can do to collaborate with universities that would cut down on other costs.”

More made the comment in an exclusive interview with UNews.

NSCAD supporters have expressed concern that the province is pushing NSCAD toward a merger with another university and are concerned that NSCAD could lose its independence. The province has funded studies to look at the feasibility of a merger. The results of these provincially funded studies are expected in May, after the deadline the province has set for submitting a long-term funding plan.

On the website NSCAD is Alive, supporters are encouraging the university community to call the minister’s office throughout the weekend to leave messages about why NSCAD matters to them.

She said that when NSCAD moved into its new Port Campus it knew one of only three possible funding partners — the provincial government — had committed funding.

“We value NSCAD. We know that it has an international reputation and that the students are very, very pleased with the quality of programming that they get at that university,” she said.

NSCAD will submit a long-term plan detailing how it will eliminate its debt by March 31.

More said a working group preparing a new memorandum of understanding with the universities is looking at different funding models used in other provinces.

“Things like the excellence of the programming, perhaps specialization,” she said.

The current model of university funding — last negotiated in 2012 —is 90 per cent based on enrolment and the cost of delivering the program.

A 2012 report from Students Nova Scotia recommended that university funding be based on the quality of the program and not enrolment.  The report argues that universities are building enrolment quickly instead of focusing on teaching quality or student support. Students NS would like funding to be 50 per cent based on enrolment and 20 per cent on measured student performance.  Another 20 per cent would link funding to government economic, social or cultural priorities.

“What happens in other provinces and other countries impacts on the availability of out of province and international students here, “ More said.

More says Premier Darrell Dexter is on record saying the undergraduate funding in Nova Scotia will stay at or below the national average.

At this point that’s the only commitment that we can make,’ she said.

She said the working group is trying to promote efficiencies in university operations so more money can go towards programming and student assistance.

More added that it’s a challenge to get accurate information out to students and acknowledges that there’s “a lot of anxiety” among students.  She maintains that over the last two budget years the province has invested approximately $90 million to improve student assistance in Nova Scotia.

“That plus maintaining universities is the best contribution we can make to higher education,” she said.